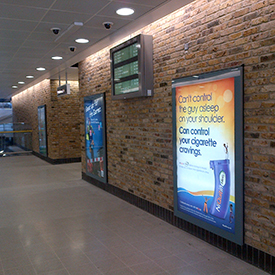 One of the major commuter hubs into London, Blackfriars Station has undergone a massive rebuild and restoration, and part of this involved the opening of a new London Underground entrance at Bankside, on the south side of the River Thames.

The original St. Paul’s mainline railway station opened in 1886 and followed the construction of St. Paul’s Railway Bridge across the River Thames. The station was not re-named Blackfriars until 1937.

The Bankside land had once been the very original Blackfriars Bridge Station, but closed in the 1880’s when it became a goods-only station. As part of the Thameslink Programme there is now an enhanced Rail and Underground facility, and the foyer of the Bankside entrance has been built using re-used high grade London Yellow Stock bricks, which were most likely originally supplied from the 19th century brickfields in Middlesex.

Concern was expressed that the high passenger numbers and being a high profile facility made these very attractive, but porous yellow stock bricks vulnerable to dusting, soiling and in the extreme event graffiti. Vulcaseal had been recommended to Pyramid Brick, the specialist sub-contractor responsible for the wall construction, as having the appropriate product. Vulcaseal V286 was able to deliver the necessary protection plus a major benefit of only needing to treat and protect the lower 2 metre’s of the brick wall, thus retaining the Yellow Stock brick’s aesthetic appeal across the whole surface.

Vulcaseal V286 is a water-based surface impregnation treatment that has a 0.00% VOC content and penetrates the pores and capillaries of both brick and mortar. Pyramid Brick spray applied the product in a single ‘wet-on-wet’ process, using a simple back pack sprayer. There was no need for masking off because once dry there was no difference in colour of the treated lower 2 metre of brick and mortar compared to the untreated higher surfaces. A Vulcaseal V286 treated surface is breathable, non-sacrificial, and by reducing the surface energy below 10mN/m2 is able to deliver the ideal water and stain repellency properties and lends for easier removal of any unwanted graffiti.